Pisces and Cancer are both water signs. Neptune rules Pisces while the moon controls Cancer. Because of being emotional and intuitive signs compatibility of Pisces and Cancer is very romantic and adoring.

Cancer doesn’t like to share their personal and believes in “what’s mine is mine”. Cancer is also up for taking charge, while Pisces doesn’t mind following the lead. Both Cancer and Pisces are patient and calm.

Pisces man and cancer woman compatibility are strong in terms of any relationship. A cancer woman is sensitive, loving, and supportive. No one can understand a Pisces man better than his cancer woman. There are barely any differences between them.

A Pisces man is self-absorbed and doesn’t let anyone into his world. However, a cancer woman lets his Pisces man open up and make him feel confident.

A Pisces woman and a cancer man’s compatibility make them a wonderful couple that keeps progressing. A cancer man is generous and adoring of her Pisces woman. He makes her feel like a Queen and not afraid of commitment and is a loyal partner.

The cancer man always stands by their woman and cheers her up when she’s low. They provide each other ease and sanity

Pisces and Cancer as Friends

Pisces and cancer compatibility in friendship makes them good friends. Both the signs are spontaneous and often read each other’s faces. Pisces are highly faithful friends who will go out there to help their Cancer buddy in difficult times.

Cancer also has a sharp memory, making them a wonderful secret keeper. Because Pisces is sloppy, Cancer mostly backs them up for many things.

Sex between Pisces and Cancer

Pisces and Cancer Couple will have sizzling sex, with Cancer being highly romantic and intense towards their lover. Pisces, on the other hand, is highly innovative in this area. However, Cancer can be intense in bed, so they may need time to adjust to their Pisces partner’s soft foreplay.

Pisces and Cancer in a Relationship

Cancer and Pisces love compatibility is quite strong since Cancer is usually attentive to the emotions of Pisces. Pisces, who is very creative and childlike, is spoiled by Cancer’s care. They will also like the thought of someone looking after them, while Pisces will cherish Cancer’s comfort and support.

Cancer is more realistic and grounded, whereas Pisces has its feet in the heavens.

Pisces and Cancer in a Marriage

Cancer and Pisces are both sensitive and emotional people. Cancer’s feelings are often masked behind a tough shell, but Pisces has an open-hearted attitude that Cancer may find hard to overcome, resulting in an explosion in the bedroom.

Pisces and Cancer at the Workplace

With a few notable exceptions, this is a very comfortable collaboration. Crabs (Cancer) are sensitive, so they understand they need a caring and supportive office environment. Pisces can be a monument of motivation and an enemy in their capsule.

They have excellent communication skills and creativity.

However, these emotions might cause stress in their relationship if not managed properly, 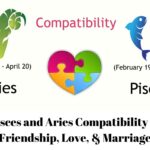